Nova Huta 1 man band from Hamburg, going on tour with Neoangin for 6 years now.  It’s never boring with Nova Huta.  Sometimes he climbs off stage for half his set; another time he steals the audience’s shoes.   He intonates his burning soul with the help of a toneless depressivo-speaking voice accompanied by the beat of fakegaydisco.
Nofi Short for no fidelity, and a vague description for a sound that actually is no longer around, yet still turns up occasionally, for example: at Neoangins infamous record release party in 2006, where the speakers were fried after 10 minutes. At his gig at the Chelsea Hotel no one had thought of booking a soundsystem and thus Neoangin had to use the speakers from his very own kitchen. 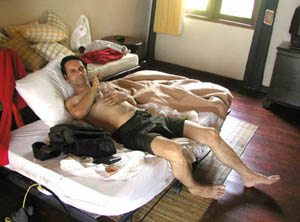