Fever A musical that Neoangin developed and performed together with Nova Huta and Bad Taste in Moscow in April of 2005.  The story of an unstable guy named Adam, who is running a kiosque.  After Adam receives orders from „the man" to close his kiosque he decides to drink himself to death.  This production is a hip revue with dance parts but no happy ending.  The different participants get into a huge fight, with the result that after an outrageous opening the musical is put on ice, even though they were offered a month long engagement in a Moscow theater.
Friendly Capitalism A popular happening curated by Femi Baumbach and Jim Avignon, in which they question and critique the correlation between subculture and sponsoring. They invite equal numbers of semi-celebrities from the art and music world. There are no sponsors, the cover charge is minimal and all artists are paid equally. 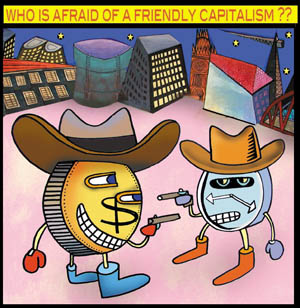